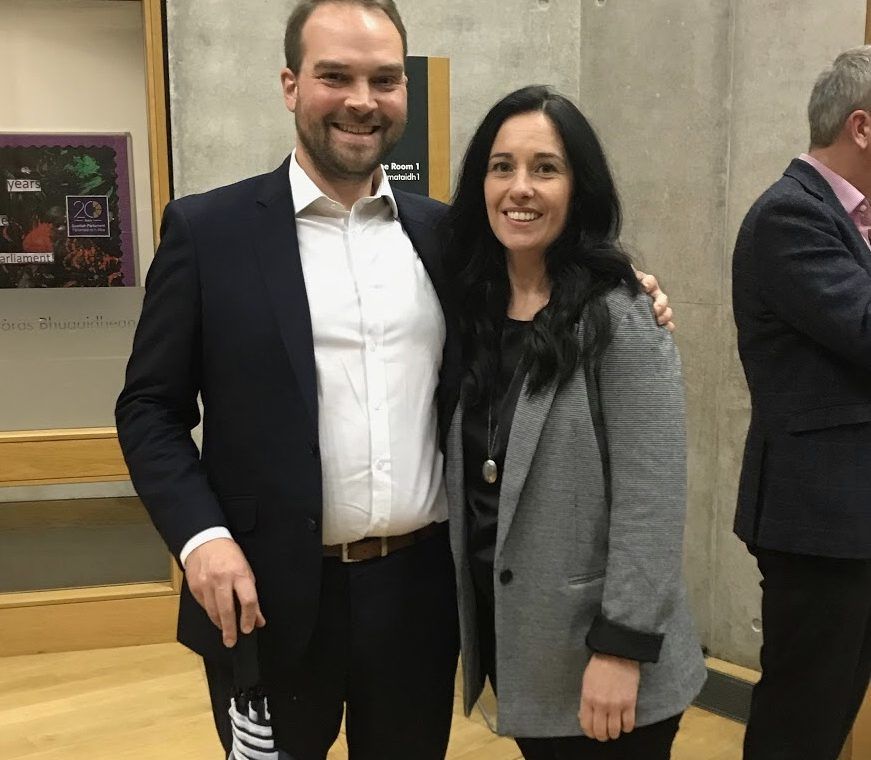 Since we started this journey, we have been honest with ourselves and with everyone we have encountered – we are not experts in children and young people’s mental health. We have our own perspectives and we have a voice, but much more importantly, we intend to listen. So I have tried to accept as many invitations as possible to meet someone for a coffee, to go to an event, to speak to a professional or to hear about people’s experiences first-hand.

This week’s exercise in opening my mind was watching a new film being screened at the Scottish Parliament. I was invited to attend the screening of a new film called Connect, by the director, Marilyn Edmond (pictured with me here).

The film follows Brian (played by Scottish actor Kevin Guthrie) on his journey through depression, anxiety and suicidal thoughts in a small coastal town (is that you North Berwick?!?). I won’t say anything else about the content for fear of spoilers. You should watch it if you get the chance, but be prepared to have your emotions pulled in every direction.

It was a tough watch, for the obvious reason that it triggered memories of my own brother’s struggle and eventually his death last year. One of the reasons I am so motivated to help Tiny Changes make a difference is that I am channeling a lot of frustration that suicide, and male suicide in particular, is still so prevalent in this country. Having seen first-hand how devastating such a death can be, it makes me angry that we as a society seem unable to get to grips with something that feels like it should be preventable.

The film has stayed with me since I saw it (you really should see it too if you get the chance – keep an eye out for a screening coming to a town a near you), and it has also caused me to educate myself on how suicide is (and should be) portrayed in the media, both creative and factual. It is such a tricky balance between reducing the stigma of talking about suicide and creating dangerous thought patterns in already vulnerable people that may be at risk of harming themselves. There are clear media guidelines for the reporting and dramatic portrayal of suicide, but I wonder whether we have some way to go before we fully understand the impact of the words, sounds and pictures we choose when talking about suicide.

Thanks again to Marilyn for the invite and to Miles Briggs MSP for hosting the screening. For more info on tickets, check out their website here: www.connect-film.co.uk.